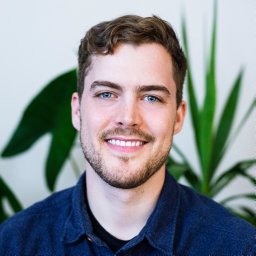 My Ph.D. work ended in the discovery of a new class of finite element methods called DPG* methods, as well as in classifying a nebulous category of methods called discrete least-squares methods (DLS methods). In addition, I wrote software for high-order adaptive computer simulations and developed specific for methods structural, fluid, and wave mechanics problems.

Much of my PhD research, supervised by Leszek Demkowicz, was spent focusing on discontinuous Petrov-Galerkin finite element methods (DPG methods). In my early postdoctoral work, I focused in part on a non-standard approach to finite element analysis which was dubbed the "surrogate matrix methodology." During my subsequent academic positions, my interests grew to include stochastic optimization, scientific machine learning, numerical relativity, and turbulence modeling. The following summaries only pertain to my early contributions to the field of finite element analysis.

It can be shown that the majority of entries in the coefficient matrices generated by many Galerkin finite element methods can be computed by evaluating a small number of smooth so-called "stencil functions" at evenly-spaced points throughout the computational domain. Surrogate matrix methods provide low-cost coefficient matrices for such methods by simply evaluating approximations of these stencil functions. The methodology has been applied to classical finite element methods with lowest order simplicial elements as well as isogeometric methods, which employ high-order B-spline or NURBS bases.

In an ongoing series of papers, surrogate matrix methods have been successfully used in a large number of problems with steady or transient characteristics. This includes Poisson’s equation and p-Laplacian diffusion, membrane vibration, plate bending, Stokes’ flow, linear and nonlinear elasticity, and high frequency wave propagation problems. Using surrogate methods can significantly reduce the time to solution in isogeometric analysis (IGA) at a few million degrees of freedom or in large-scale matrix-free applications with billions of degrees of freedom. This ongoing work is part of Daniel Drzisga's PhD research.

From extensive research on DPG methods, the term discrete least-squares finite element method (DLS method) was coined. The discrete linear systems in DLS methods have a very specific algebraic structure which can be exploited to accelerate computation or to reduce round-off error.

Goal-oriented methods are tailored for accuracy in a specific output. With goal-oriented methods, great efficiency improvements can be achieved because a globally high-quality solution is often not necessary. Once the output is determined, there are many different ways in which to seek efficiency improvements. One way is through goal-oriented adaptive mesh refinement, which can be rigorously formulated in non-symmetric functional settings and applied to DPG methods.

In a sequence of two papers, Federico Fuentes and I analyzed four different formulations — denoted strong, mixed, primal, and ultraweak, respectively (see figure; left) — of a common linearized elasticity model. This project culminated in the analysis of a very difficult high material contrast coupled rubber and steel model (see figure; center and right). Here, due to the incompressibility of the rubber, standard displacement-only methods will often break down or ''lock.'' Additionally, the steel in the model is very thin and so, likewise, some alternative formulations will often break down there. Our solution was to develop a special method coupling two different formulations together at the material interface; hence, greatly improving the accuracy possible solely with either individual formulation.

Viscoelastic fluid models are commonly used in engineering to simulate blood and polymer melts. These models are well-known to very challenging both in simulation and in mathematical analysis.

I developed a new DPG finite element method of the Oldroyd-B viscoelastic fluid model which is intrinsically stable throughout a broad range of model parameters. I then studied parameter-dependent adaptive mesh refinement with the method. The simulations for this project were completed using the Camellia software library.

Perfectly matched layers (PMLs) are a very widespread type of artificial absorbing boundary layer used in numerical methods for wave propagation problems defined on unbounded domains. In order to lay the groundwork for some of my colleagues to begin their dissertation research, Ali Vaziri Astaneh and I developed PMLs for high-order DPG methods for acoustic, elastodynamic, and electromagnetic models.

I have written a significant amount of software in Fortran, Matlab, Python, and C++. Some of the software projects which I have led or contributed to are described below.

Throughout my PhD studies, I maintained and contributed to hp2D and hp3D. These two finite element libraries, written in Fortran and developed by Leszek Demkowicz, have complete 2D/3D support for local hierarchical anisotropic h- and p-refinement with one level of hanging nodes and shape functions for all standard elements conforming in each of the canonical de Rahm complex of Hilbert spaces:

The software is not open-source due to limited documentation, but it is well-used by the Electromagnetics and Acoustics Group at the Oden Institute and by many of their collaborators.

The ESEAS (exact sequence elements of all shapes) software library supports a complete set of features for evaluating shape functions in high-order finite element methods written in the Fortran 77 standard. The library is innovative for its support for all standard elements in one, two, and three spatial dimensions for arbitrary polynomial order (see figure above; left). It relies on a minimal set of hierarchical routines to construct all the shape functions. This hierarchical construction was the breakthrough which lead to the first explicit construction of arbitrary order pyramid elements (see figure above; right).

ESEAS is currently being used inside hp2D and hp3D, HOFEM, and Sierra. It is being rewritten and optimized in C++ for the Trilinos and MFEM libraries.